There are many factors that affect the outcome of a battle: selection of heroes, formation, research upgrades, and when it comes to gambit heroes especially, gear.

Let’s begin by looking at a battle report here.

Here we see a lineup starring one gambit hero: Alfred the Great.

The power of his gambit depends on his Tactics stat, which is currently 73. While his gambit is quite powerful, it is not quite effective enough when faced against a strong opponent.

But when we equip him with an Orange Mount, here’s what happens.

This is because an Orange Mount has a much higher growth rate than any other mounts in the game. Here’s a contrast of different color grades of mounts:

Evidently an orange mount will grow much faster and updating an orange mount can accumulate much higher stat bonus than any other mount. It is important to remember that the higher the color-grade of a gear, the more cost-efficient it is to upgrade this gear and the more powerful this gear can become.

Remember, if you want to build an unstoppable Gambit Attack line-up, you need at least one orange mount!

How to Get An Orange Mount/CapeEdit

Starting from Lv. 30, you will unlock the Scouting feature in your Armory. Here you can sent out Horse Scout or a Cloak Scout.

Sending out Scouts cost Silver, but starting from Lv. 51 you will receive one free chance to Scout after 5 AM each day.

When your scout discovers a new mount or a new cloak for you, you can choose to keep it (Click Accept or do nothing) or sell it. You might want to sell lower color-grade gear and keep the higher color grade ones.
There are four levels of scouts available: Horse Scout, Advanced Horse Scout, Arabian Horse Scout and finally, the Royal Horse Scout.

The Horse Scout requires silver (quite a lot actually) and has a Cooldown. However the finding is definitely worth the trouble of getting the Silver and trying your luck! For players past level 35, gear become increasingly powerful and valuable, and your horse scout and cloak scout will not disappoint you!

The goal of this Guide is to help everyone understand how to use the Daily Guides and the benefits of using them.

Must be Level 40.Edit

In order to have these quests appear you must be level 40. They are located on the quest screen on the Daily Quests tab which is located between Main Quests and Events.

Daily Quests are an important source of Battle Points and Enchanted Items.Edit

These quests offer more Battle Points than average Battles. In addition if you are using a Spell Caster then you will want to make use of your Daily Quests as they are the only source for high level Enchanted Items.

Each day you can only complete 6 Daily Quests per day. So make sure you do not waste them on quests that give you a limited amount of rewards.

Pay attention to the difficulty.Edit

Each week has a different level of Difficulty this can be a maximum of 10 stars. If you are a VIP you can refresh quests for a certain amount of Gold to try to get quests that are more stars than the current quests for that week. Highest quality of Enchanted Items are from 10 Stars Daily Quests. So if you want to try a spell line-up, you should go for the highest difficulty quests.

You will find that when you will reach a point where you have leveled up a lot of things and need more of an edge. That is where Reborn comes into play. It adds 10 stars to your Heroes Unit Type. This effects the Attack and Defense of your Hero and also his Unit Size.

What will happens after rebirth?Edit

After your Hero is Reborn they will be brought back down to level 1. Then you will have to train them all the back up to your current level.

When can I rebirth my Heroes?Edit

Heroes can start to be reborn at level 51. It is recommended that you have a plan when you have a Hero reborn as they will not be of much use to you while they are training. It is a tough choice you will have to make as it has benefits and disadvantages.

Where to find the Button?Edit

This button is located in the Enlighten interface in the upper right hand corner. It is only usable after level 51 and the requirement will up for 10 levels for each reborn. 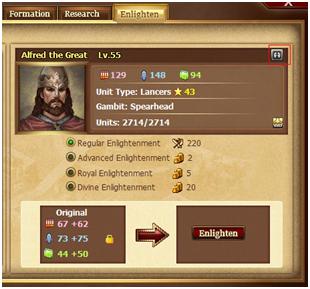 Retrieved from "https://chroniclesofmerlin.fandom.com/wiki/Advanced_Guide_-_Section_3?oldid=10553"
Community content is available under CC-BY-SA unless otherwise noted.