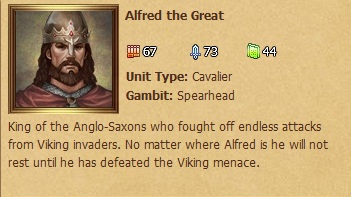 Alfred the Great is the final Boss army of the Viking Invasion Campaign.

Alfred the Great is a "Great" mid and late game hero (until level ~60-70 or until prestige heroes come into play) due to his fairly high Tactics stat and his strong gambit which strikes in a deadly path almost always hitting 2, and sometimes 3 heroes.

His gambit is pure Gambit damage so give him a well upgraded Mount, upgrade your gambit attack research/formation and enlighten his Tactics. He will be your powerhouse hero for a while.

Retrieved from "https://chroniclesofmerlin.fandom.com/wiki/Alfred_the_Great?oldid=8721"
Community content is available under CC-BY-SA unless otherwise noted.