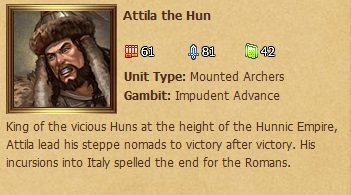 Attila the Hun is the Final Boss army in the Heavenly Scourge Campaign.

His gambit has a chance to poison the enemies causing them to lose 20% of their REMAINING troops for their next two turns. The poison effect is especially useful when Attila is not very strong or when attacking a defensive target such as Richard with Entrench active.

His gambit is strengthed solely through gambit attack stats (that includes Tactics).

He is generally a very good hero and is only outshined by higher tier heroes such as Galahad or Florismart. His initial gambit damage is a bit weaker than Alfred's due to the poison function making Attila and Alfred overall very similar in terms of damage.

Retrieved from "https://chroniclesofmerlin.fandom.com/wiki/Attila_the_Hun?oldid=12429"
Community content is available under CC-BY-SA unless otherwise noted.