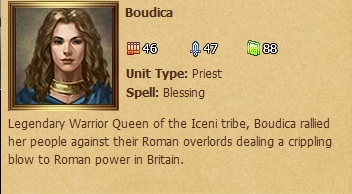 Boudica is used by a large number of players, primarily King Arthur and Caeser players since Charle has a strong siege hero line up early game. She is as important to a gambit hero formation as the gambit heroes themselves.

If you intend to use gambit heroes, it is highly recommended you recruit and use her as soon as you can. She should only be replaced with Helen from Trojan Warriors campaign or when you obtain your respective kingdoms prestige priest (Guinevere for KA, Cleopatra for Caesar, Turpin for Charlemagne).

Being a low tier hero with terribly low Bravery and Tactics, she also has a low unit count/growth rate (+28 units per level or ~3000 units with full researches and no crown at level 60) and can be killed quickly in higher (60+) level combat.

She does not benefit from a staff or spell attack in anyway shape or form. You can only alter her abilities success rate through the Cluster formation.

Retrieved from "https://chroniclesofmerlin.fandom.com/wiki/Boudica?oldid=13335"
Community content is available under CC-BY-SA unless otherwise noted.