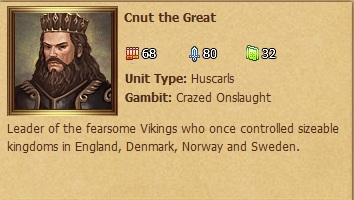 Cnut the Great is the first recruitable hero in the Viking Invasion Campaign.

Cnut the Great has potential to be one of the strongest early game heroes due to his high Tactic stat and his gambit attack, Crazed Onslaught. His weaknesses are his extremely low Magic stat, lack of good unit bonus and his gambit attacks 2nd strike which has about a 50% fail rate.

You can get high and do extra damage in the campaign with him, but he is not recommended for serious PvP or mid-high level campaign use.

Retrieved from "https://chroniclesofmerlin.fandom.com/wiki/Cnut_the_Great?oldid=13541"
Community content is available under CC-BY-SA unless otherwise noted.