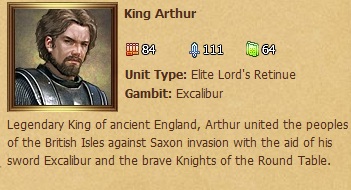 King Arthur is the final King Arthur kingdom's prestige hero and is unlocked at 500,000 prestige.

Gambit - Excalibur: Attack a target and all enemies in the same row and column.

King Arthur is a mid-late game elite gambit hero. King Arthur has an amazingly high Tactics stat (highest in the game). His attack pattern is the same with Ogier the Dane.

1 of 2
Add photo
Retrieved from "https://chroniclesofmerlin.fandom.com/wiki/King_Arthur?oldid=13332"
Community content is available under CC-BY-SA unless otherwise noted.