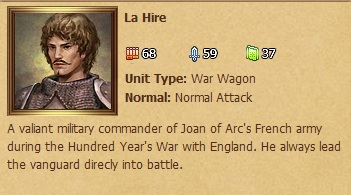 La Hire is obtained in the Hundred Years War Campaign.

La Hire looks bad all around, his bravery is low, his tactics even lower and his magic is awful. His damage output is pathetic and his unit count is your normal mid-campaign amount.

However.....his unit type War Wagon appears to reduce damage to a great extent making him an excellent tank who is likely overall better than an entrencher (both deal pathetic damage) because he does not need morale to be a tank nor is he vulnerable for up to a couple turns at a time.

La Hire has shown surprising results as a tank and if that's what you're looking for (valuable in the same way that he only needs armor and a cloak to be useful in your army like a support unit) then definitely use him. His Unit Type bonus appears to be more effective than the Cataphract unit type (Reduces damage taken).

Retrieved from "https://chroniclesofmerlin.fandom.com/wiki/La_Hire?oldid=8451"
Community content is available under CC-BY-SA unless otherwise noted.