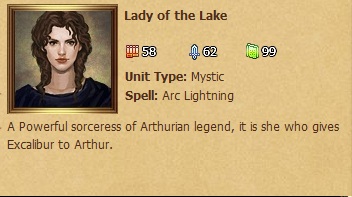 Lady of the Lake is a King Arthur prestige hero and is unlocked at 210,000 Prestige.

Spell: Arc Lightning. This spell hits enemies in a diagonal pattern like Naimon.

Lady of the Lake is a mid game spell hero. Her attack pattern is large and can be a good advantage for you. She is nothing more than damage, her bravery and tactics being very low. Her spell hit rate is 80% which means that she has a bigger chance to hit more times than heroes like Sir Kay. Like the Multi-target siege heroes, her attack deals less initial damage than other casters, however if she hits multiple targets she can put out more damage than other casters.

To increase her spell attacks equip her with Enchanted Items. Overall she is a useful hero but should be put behind other more tanky heroes like Sir Kay, she also relies on the enemy formation as well as your own to deal great damage.

1 of 2
Add photo
Retrieved from "https://chroniclesofmerlin.fandom.com/wiki/Lady_of_the_Lake?oldid=12950"
Community content is available under CC-BY-SA unless otherwise noted.