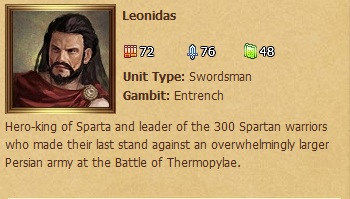 Leonidas is the first of two recruitable bosses in the Greco-Persian Clash Campaign.

Leonidas is an advanced version of Meera and Richard the Lionheart. He has better Tactics than Meera but slight less Bravery and Magic. He has moderately better Bravery and Magic than Richard but less Tactics.

His unit count is noticeably higher, but at this point in the game, if you're still using an entrench hero, they're already better enlightened and leveled than Leonidas and he is not worth the time and effort. If you insist on using an entrench hero for a long time, then by all means go for him.

Retrieved from "https://chroniclesofmerlin.fandom.com/wiki/Leonidas?oldid=10846"
Community content is available under CC-BY-SA unless otherwise noted.