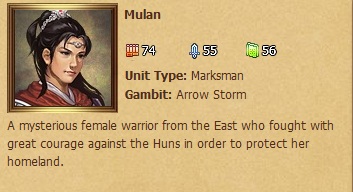 Mulan is the first recruitable hero in the Heavenly Scourge Campaign.

Mulan's unit type is great and her Gambit attack, Arrow Storm, has a pretty good target area. Her strengths are weighed down by her weaknesses though which is her very low Tactics stat and the potential to reduce her gambit to hitting a single target through formations like Cluster, Wedge or Trident.

Retrieved from "https://chroniclesofmerlin.fandom.com/wiki/Mulan?oldid=8444"
Community content is available under CC-BY-SA unless otherwise noted.