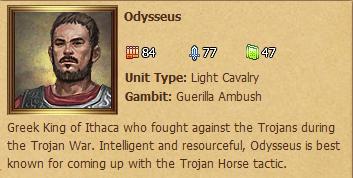 Ambush a single target in the back column with a chance to cause all enemies to panic (cannot attack for next round).

He is one of the three hero's commonly thought to be used to be able to beat the dragons in HEPL, due to his ability to stun the back dragon. His stun is not consistant, and it requries luck. His magic stat is lackluster, making him relevant only for the Dragons past IOD. He requires maxed magic in order to last more than 2 rounds with the dragons.

Retrieved from "https://chroniclesofmerlin.fandom.com/wiki/Odysseus?oldid=12105"
Community content is available under CC-BY-SA unless otherwise noted.