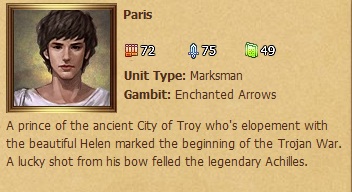 Paris is the first recruitable boss from the Trojan Warriors Campaign.

Paris' gambit landing 100% of the time makes him sound like a great hero, but he isn't. His unit type is awesome, his bravery and tactics are nothing to scoff at and his gambit can't fail...however, the problem is that his gambit attack is a Single Target attack.

In this game, offense rules. Single target attacks without awesome bonuses fall behind multi-target attacks. If his Enchanted Arrows gained 100% critical strike chance, then he could be considered a great hero.

Retrieved from "https://chroniclesofmerlin.fandom.com/wiki/Paris?oldid=8755"
Community content is available under CC-BY-SA unless otherwise noted.