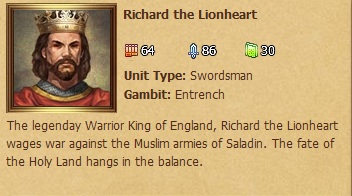 Richard is the second recruitable boss in the Holy Crusades Campaign.

Richard the Lionheart is a popular early game hero because of his gambit, Entrench. The defensive part of Entrench does not rely on any equipment or stats, it is the same at all times.

His gambit grows at a slower rate, about half of other heroes like Attila or Alfred.

He is not recommended for use after level 40.

Retrieved from "https://chroniclesofmerlin.fandom.com/wiki/Richard_the_Lionheart?oldid=8423"
Community content is available under CC-BY-SA unless otherwise noted.