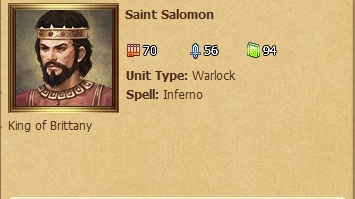 Saint Salomon is a Charlemagne kingdom prestige hero and requires 210,000 prestige to unlock.

Saint Salomon is a tempting hero because he's the earliest useful spell hero that Charlemagne players get access to. He can be useful in the level 30 range for the avid PvP'ers but afterwards his single target attack and inadequate accuracy leave him an unsatisfying hero.

Retrieved from "https://chroniclesofmerlin.fandom.com/wiki/Saint_Salomon?oldid=10596"
Community content is available under CC-BY-SA unless otherwise noted.