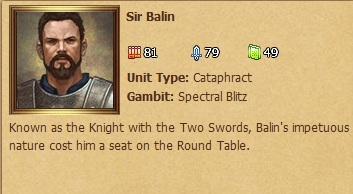 Sir Balin is a King Arthur hero and requires 100,000 prestige to unlock.

Gambit - Spectral Blitz: This gambit hits his target and the targets 1 space to the left, right, and behind it, dealing additional spell damage

Sir Balin is an early-mid game gambit hero that deals huge damage due to his Spectral Blitz. His Spectral Blitz deals both gambit and spell damage. He is a weaker version of Sir Lancelot.

One interesting thing is that when Sir Balin hits enemy swordsmen or gladiators in their defense mode, he can damage them with the spell part of his gambit. To increase his Spectral Blitz equip him with Mounts and Enchanted Items. Also do not forget to get Weapons for him or to enlight all his stats with tactics and magic as priority.

Retrieved from "https://chroniclesofmerlin.fandom.com/wiki/Sir_Balin?oldid=13307"
Community content is available under CC-BY-SA unless otherwise noted.