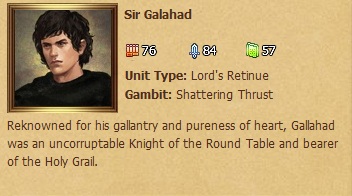 Sir Galahad is a King Arthur prestige hero and is unlocked at 150,000 prestige.

Gambit - Shattering Trust: Damages enemy troops in a column with a chance to stun them.

Sir Galahad is a mid game gambit hero. His ability, Shattering Trust, can stun all the armies in front of him or a few of them. He is recommended to use until you can recruit and train King Arthur. However, there are some battles in campaign where you will need more his stun than Arthur‘s large attack area.

Try to equip him with powerful Mounts and Weapons. Focus on tactics when you decide to enlight his stats.

Retrieved from "https://chroniclesofmerlin.fandom.com/wiki/Sir_Galahad?oldid=12949"
Community content is available under CC-BY-SA unless otherwise noted.