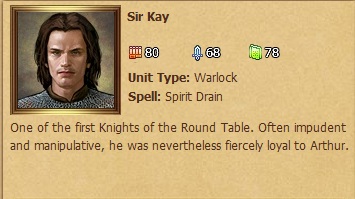 Sir Kay is a King Arthur hero and 20,000 Prestige is required to unlock him.

Spell - Spirit Drain: Use magic to steal enemy‘s life and replenish your own units.

Sir Kay is an early-mid game spell hero. He has a high bravery which helps him to be more tanky than other early game spell heroes. His spell is called Spirit Drain: Sir Kay deals damage to the enemy and heals himself for the damage dealt. Sounds incredibly strong but due to a few weaknesses he is very beatable, so don‘t consider true any newbie advice that say “Sir Kay is the strongest, you just can‘t stop him“.

After you have learned how his ability works it‘s time to see what is the best strategy to use him more efficient. Sir Kay can be put in front of formation because he is very tanky and is a pain for enemies till he dies. To increase his spell attacks equip him with powerful Enchanted Items. He is highly recommended to be used until you can recruit Khufu from Desert Menace campaign.

Retrieved from "https://chroniclesofmerlin.fandom.com/wiki/Sir_Kay?oldid=12945"
Community content is available under CC-BY-SA unless otherwise noted.