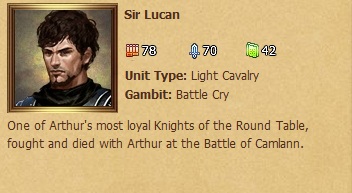 Sir Lucan is a King Arthur hero and requires 9,000 prestige to unlock.

Gambit - Battle Cry: Deal gambit damage to a single target and lower all enemy morale by 30

Sir Lucan is an early game gambit-support hero. He has moderate gambit attack, attacks a single target and has just average tactics: 70. Note that his main role in your formation is not to deal huge damage, is to prevent your army by taking enemy gambit attacks.

He has high dodge rate. Use this aspect in your advantage. Because he doesn‘t have great damage and hits only one target you can put no attack gears on him in order to save your silver for other important gears. Like Sir Bedivere, Sir Lucan is a lvl 30 region hero. Try to switch him with a better hero after you leave the region.

Retrieved from "https://chroniclesofmerlin.fandom.com/wiki/Sir_Lucan?oldid=12922"
Community content is available under CC-BY-SA unless otherwise noted.