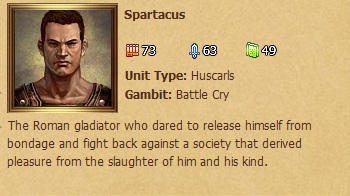 Spartacus is the first recruitable hero in the Treacherous Revenge Campaign.

Unit Type - Huscarls: Average chance to block. Gambit - Battle Cry: Deal damage to a single target while lowering all enemies morale by up to 30.

Spartacus has no place in anyones formation, his stats are subpar, his unit type is weak, his gambit attack's only value is taking 30 morale from the enemies which doesn't happen enough to be useful.

It is highly recommended to IGNORE this hero.

Retrieved from "https://chroniclesofmerlin.fandom.com/wiki/Spartacus?oldid=8722"
Community content is available under CC-BY-SA unless otherwise noted.