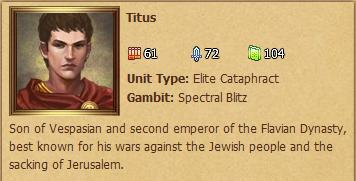 Titus is a Caesar Kingdom hero and requires 280,000 prestige to unlock.

Gambit - Spectral Blitz: Launch an attack on the enemy with the aid of magic, dealing Gambit and Spell damage to a target and the enemies 1 square to the left, right and behind of it. The magic damage portion bypasses entrench.

Like Sir Balin and Sir Lancelot, Titus' gambit will get stronger by increasing his spell & gambit damage through equipment, researches and enlightening his Tactics and Magic stats.

Unlike Sir Balin or Lancelot, Titus has a high base Magic stat and medium Tactics. This means that more of his Gambit's damage will come from Magic(Spell Attack) rather than Tactics(Gambit Attack) when compared to Balin or Lancelot's Gambit.

He can take lower level players by surprise as it's hard to get adequate Spell Defense in the level 30 and 40 range.

1 of 2
Add photo
Retrieved from "https://chroniclesofmerlin.fandom.com/wiki/Titus?oldid=11489"
Community content is available under CC-BY-SA unless otherwise noted.